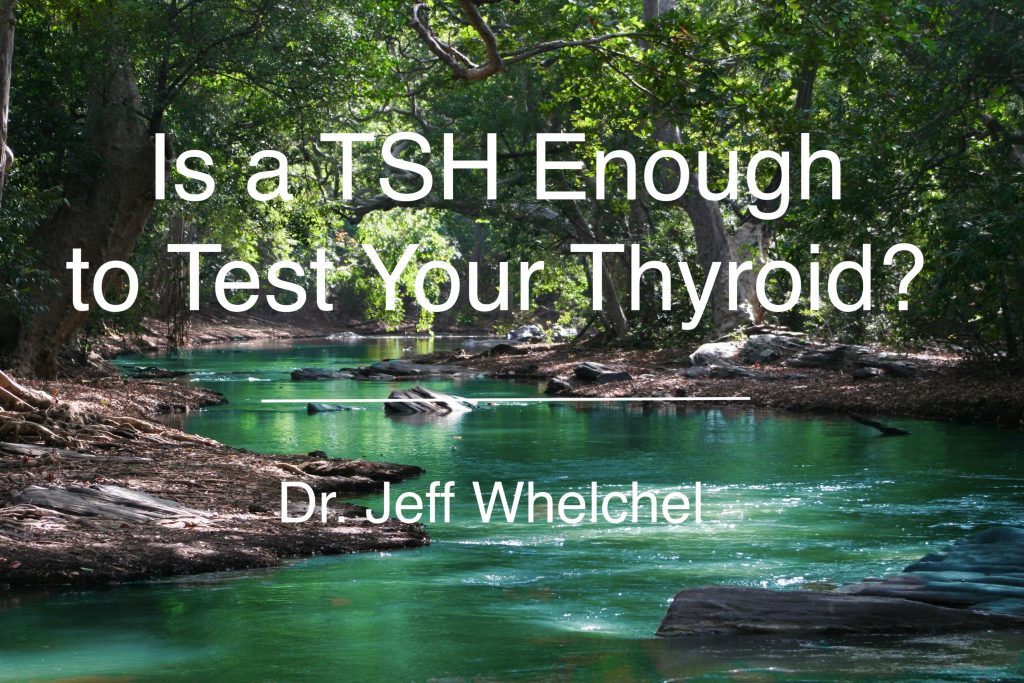 Is a TSH Enough to Test Your Thyroid?

​Most medical providers have been trained to only check the TSH when monitoring thyroid function.

​But is th​e TSH enough to ​test your thyroid?  Is it enough to monitor whether you are on the right dose or right type of thyroid medication?

The answer is a definite "no" and I will explain why in this article...

Let's quickly review what the TSH is and what it indicates: 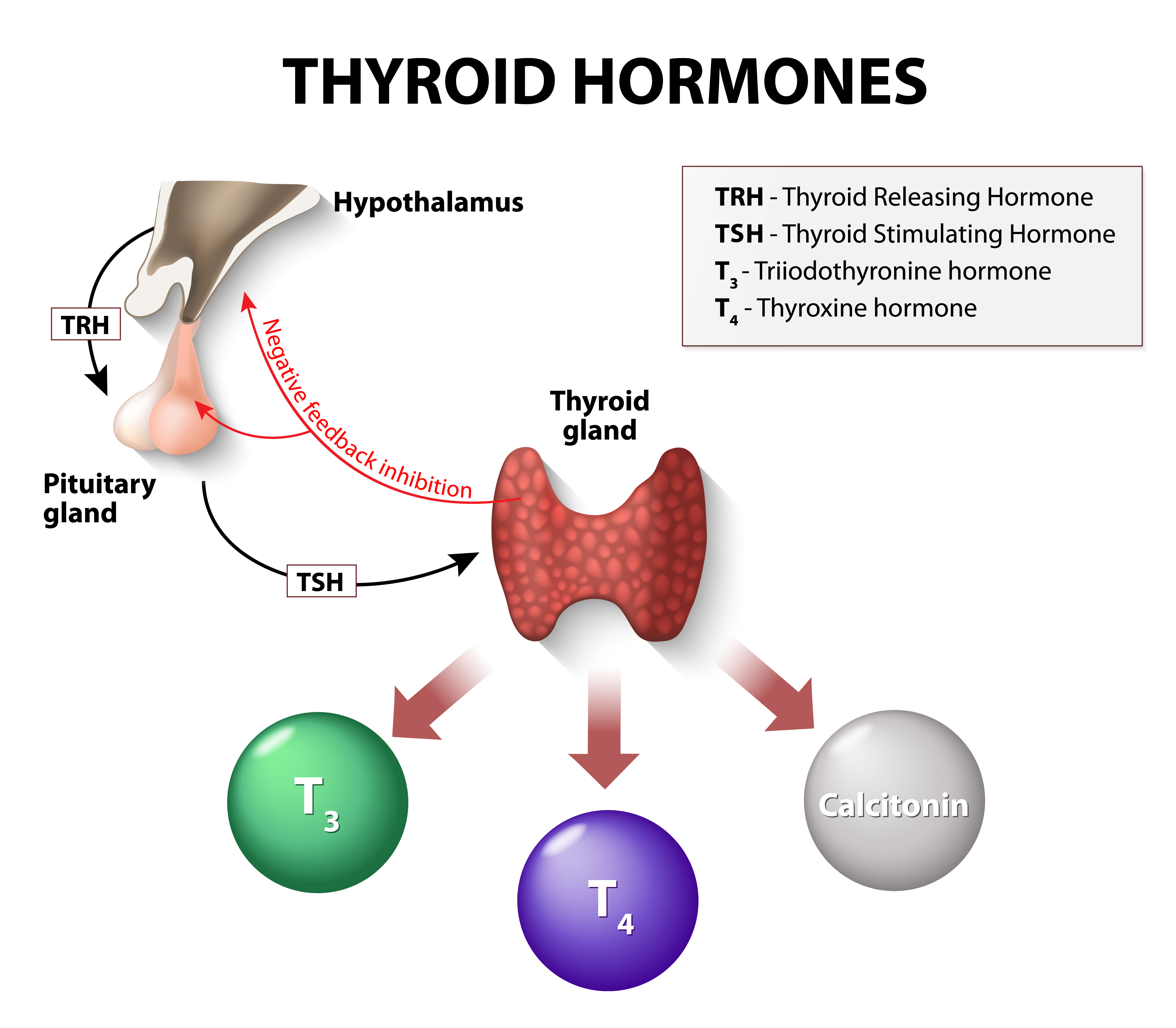 ​All thyroid activity actually begins in the hypothalamus of the brain​.  The hypothalamus secretes a hormone called Thyroid Releasing Hormone (TRH) which then stimulates the pituitary gland to secrete TSH.

​TSH ​an acronym for Thyroid Stimulating Hormone.  ​It's purpose is to stimulate the thyroid gland to produce thyroid hormone.

The pituitary gland measures the level of T4 and T3 in the blood ​of the pituitary and secretes TSH in order to keep the levels of thyroid hormone in the optimal ranges.

When the body is healthy and working normally, this feedback loop works seamlessly to regulate thyroid function in the body.

The result is the TSH moves in the opposite direction of the thyroid hormone level.  If you are low in thyroid hormone, your TSH will usually go high, and vice versa.

Prior to the 1970s, the history and physical exam were the primary tools used to diagnose hypothyroidism, Grave's Disease, Hashimoto's Thyroiditis, and other thyroid conditions.

​The TSH lab test was developed in 1975 and has been considered the gold standard for diagnosing and managing thyroid diseases ever since.

​The vast majority of medical providers (doctors, PAs, NPs) are taught in their training to just use the TSH lab test to test for thyroid disorders and to monitor thyroid medications.

If you ask ​them to do a complete thyroid​ workup to see if you have thyroid disease, they will order a TSH and ​sometimes a T4 level or TPO antibody level.  The other tests are rarely ordered, and even if they are, most providers don't really know how to interpret them correctly.

​Conventional medicine doctors are taught this simple rule - If the TSH is high, you have hypothyroidism.  If it is low, you have Grave's disease or you are on too much thyroid medication.

Sounds simple, doesn't it?  Unfortunately, evaluating the thyroid is much more complex than that.

​I personally believe that in order to truly evaluate ​someone's thyroid health, you need to order a complete thyroid panel.  Those tests include: ​If you want more information on each of these tests, what the levels are indicating, and optimal ranges for each, read my article here.

The sex hormone binding globulin (SHBG) can also be very helpful in assessing thyroid levels in the body, especially if you are on thyroid medication.  Read more about it here.

​Common Causes of a Suppressed TSH

So ​is checking the TSH enough to diagnose and manage thyroid disorders?  No, because there are many situations in which the TSH will be falsely suppressed or at least lowered from what it really is.

Suppressing (lowering) the TSH level makes it look like the person has more thyroid hormone in their body than they really have.  As a result, this may make it look like they are on too much thyroid medication when the opposite is actually true.

Also, if they haven't been diagnosed with hypothyroidism, this may mask their true levels and prevent the diagnosis from being made because the TSH is "normal."

Now let's discuss some of the situations where the TSH may be falsely low:

​The TSH can be transiently low or even undetectable in up to 20% of normal pregnant women with no other signs or symptoms of hyperthyroidism.

​Several classes of drugs ​can suppress the TSH.  The most common ones include:

​It is common practice to give Hashimoto's patients thyroid hormone medication as a treatment for their autoimmune disease.

This is because studies show that thyroid hormone medication can reduce thyroid antibody levels even if the TSH is normal.  ​Click here, here, here, here​,  and here​ for even more studies.

This will obviously result in​ the TSH being suppressed a large percentage of the time in patients with Hashimoto's.  However,​ it brings the T4 and T3 levels ​into the optimal range.

The hypothalamic-pituitary-adrenal axis is a complex system that controls many of the hormone systems of our body.  Research shows that when that system does not function correctly, it can have a major impact on the body.  That is called HPA dysfunction.

​​HPA dysfunction is ​relatively common.   ​When this system isn't working properly, many of the hormone glands in our body - adrenal, thyroid, ovaries, and testicles - do not work normally.  This results in reduced production of cortisol, thyroid hormone, and sex hormones.

People that have HPA dysfunction ​often have low TSH levels (because of reduced production of TRH), which makes it appear on lab tests that they have adequate or even high thyroid levels in the body.  In reality, the majority of them have LOW thyroid levels, even though their TSH is in the low or normal range.

​​HPA dysfunction is commonly found in people with conditions such as Chronic Fatigue Syndrome and Fibromyalgia.

If you suffer from one of these conditions or know someone who does, you may realize that many of the symptoms appear the same as hypothyroidism:

​This has led some experts to believe that ​hypothyroidism at the cellular level may be one of the primary causes of fibromyalgia and chronic fatigue syndrome.

In this study, researchers gave liothyronine (T3) to patients with fibromyalgia, even though their TSH was in the normal range.  It resulted in the patients having a suppressed TSH consistent with what most doctors would call hyperthyroidism.

However, their fibromyalgia symptoms were greatly improved, and there were no significant side effects from taking the high doses of thyroid medication.

​Could fibromyalgia and chronic fatigue syndrome be at least partly caused by undiagnosed hypothyroidism?  It is something that should be considered.

​This sounds way more complicated than it really is.

​To put it simply, some people are born with a defect in the receptors in their cells where thyroid hormone attaches.  Receptors are like ​locks on the cell wall.  If the right key fits into those ​locks, it will trigger whatever function in the cell that the receptor was designed to do.

Below is a diagram of how this is supposed to work: ​However, if the lock is defective in some way, it may not work right even when the right key fits into it.

This is what happens when there is a mutation in the thyroid receptor.  The thyroid hormone may attach to it, but it may not trigger the function of that receptor like it was designed to do, at least not as efficiently as it would normally.

As a result, the cells will not be as responsive to thyroid hormone as they should be.  ​This is called peripheral thyroid resistance.

​Here is an example from a recent patient in my family practice office.

This ​ 32 year old female with a history of Hashimoto's thyroiditis ​came to my office complaining of persistent fatigue ​despite taking Armour Thyroid 120mg daily, selenium 200mcg daily, turmeric daily, and B12 supplements.  She eats a whole food diet, exercises regularly, and gets good sleep.

​As you can see, her TSH is in the normal range.  If that was the only lab checked, you might think her thyroid level was normal.  However, both her free T4 and free T3 are very low and her reverse T3 is <15 (which we want).  Her TPO antibodies are slightly elevated.

This is typical of someone that has peripheral thyroid resistance.  It will take more thyroid medication than usual to get adequate amounts of it into her cells, most likely because she has a mutation of her thyroid receptors.

​I therefore increased her Armour Thyroid to 150mg in hopes of getting her free T4 and free T3 levels into the optimal range.  That will ​most likely​ cause her TSH to be suppressed below the "normal range," but it will be necessary to help relieve her fatigue and other hypothyroid symptoms.

​Only checking a TSH level is not enough to monitor the thyroid activity and function in the body.

​That is because the TSH is really only a measurement of thyroid hormone levels in the pituitary gland, which may be different than thyroid levels in the rest of the body.

Many things can cause the TSH level to be inaccurate, including some medications, autoimmune thyroid disease, chronic fatigue syndrome, fibromyalgia, thyroid receptor mutations, and even pregnancy.

In order to get a true ​assessment of thyroid activity in the body, it is important to get a complete thyroid panel and take a thorough history and physical exam.

​Do you have symptoms of thyroid disease but have been told that your TSH is normal?

Have you had experience treating your thyroid issue even though your TSH is normal?

Leave your questions and comments below.​

Hi, this is a super interesting article.

I have been seeing my GP with symptoms that are i can’t shift, the main culprits are:

Fatigue
Headaches
Acne
Difficulty retaining any muscle, although I am not overweight
Muscle pain
Irregular periods


PCOS or thyroid problems were the most likely suspects, but after blood tests my doctor is saying we can rule those out.

My dad has an under active thyroid with particular problems in his T3 levels.

Should I push for a full thyroid panel? Or does this sound like we need to explore other avenues? Apparently prolactin is commonly raised in PCOS but then SHBG should be low, not high.

Hello Carmella. It’s hard for me to form an opinion without seeing the actual numbers. I would definitely ask for a complete thyroid panel. It’s also important to remember that just because a lab result falls within the normal range of a lab test doesn’t necessarily mean that the results are optimal. See if you can sit down and have a full discussion with your doctor. Good luck.

I have been experiencing rapid heartbeat & uncharacteristic high BP after an emergency room visit (high BP) almost 3 weeks ago due to what dr thinks was interaction between gabapentin and supplements/vitamins. Dr. ran T3 (93) T4 free (1.93) TSH(.62) and T3 uptake (30). Doesn’t think thyroid is the issue even with higher T4. ER also said bloodwork was ok. Waiting in 24 hr heart monitor results. Still having periods of rapid heart beat esp during night/early am.

Hi Kim. Sorry you are having some issues. Based on those lab results, it is doubtful that it is caused by your thyroid medication, although I don’t know which one you are one. I would definitely pursue the cardiac side of it first. Good luck!